Hello all and welcome to another Top Ten Tuesday! This weeks topic is 2016 releases I meant to read but didn’t get to (but plan on reading)! Top Ten Tuesday is a weekly meme hosted the The Broke and the Bookish.

So without further ado, here is this weeks top ten Tuesday, 2016 releases I meant to read but didn’t get to (but plan on reading)!

1) Our Chemical Hearts by Krystal Sutherland 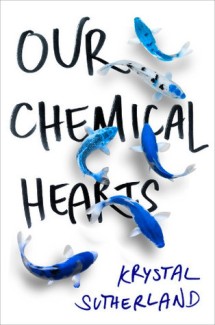 “Henry Page has never been in love. He fancies himself a hopeless romantic, but the slo-mo, heart palpitating, can’t-eat-can’t-sleep kind of love that he’s been hoping for just hasn’t been in the cards for him—at least not yet. Instead, he’s been happy to focus on his grades, on getting into a semi-decent college and finally becoming editor of his school newspaper. Then Grace Town walks into his first period class on the third Tuesday of senior year and he knows everything’s about to change.

Grace isn’t who Henry pictured as his dream girl—she walks with a cane, wears oversized boys’ clothes, and rarely seems to shower. But when Grace and Henry are both chosen to edit the school paper, he quickly finds himself falling for her. It’s obvious there’s something broken about Grace, but it seems to make her even more beautiful to Henry, and he wants nothing more than to help her put the pieces back together again. And yet, this isn’t your average story of boy meets girl. Krystal Sutherland’s brilliant debut is equal parts wit and heartbreak, a potent reminder of the bittersweet bliss that is first love.”

I bought this book soon after it came out and wanted to read it immediately but I never got the chance. But I will get round to reading it this year when I shrink my TBR. 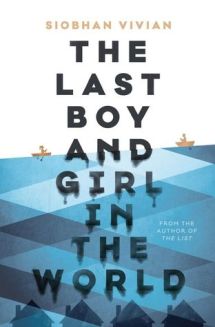 “What if your town was sliding underwater and everyone was ordered to pack up and leave? How would you and your friends spend your last days together?

While the adults plan for the future, box up their possessions, and find new places to live, Keeley Hewitt and her friends decide to go out with a bang. There are parties in abandoned houses. Canoe races down Main Street. The goal is to make the most of every minute they still have together.

And for Keeley, that means taking one last shot at the boy she’s loved forever.

There’s a weird sort of bravery that comes from knowing there’s nothing left to lose. You might do things you normally wouldn’t. Or say things you shouldn’t. The reward almost always outweighs the risk.

It’s the end of Aberdeen, but the beginning of Keeley’s first love story. It just might not turn out the way she thought. Because it’s not always clear what’s worth fighting for and what you should let become a memory.”

I again bought this book not long after it came out because of how interesting the synopsis was. But I didn’t get the chance to read it in 2016 but definitely plan on reading it soon. 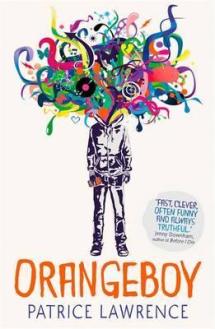 “Sixteen-year-old Marlon has promised his widowed mum that he’ll be good, and nothing like his gang-leader brother Andre. It’s easy when you keep yourself to yourself, listening to your dead dad’s Earth, Wind and Fire albums and watching sci-fi. But everything changes when Marlon’s first date with the beautiful Sonya ends in tragedy; he becomes a hunted man and he has no idea why. With his dad dead and his brother helpless, Marlon has little choice but to enter Andre’s old world of guns, knives and drug runs in order to uncover the truth and protect those close to him. It’s time to fight to be the last man standing.”

This is one of the books that stared at me from the book shelf in my local bookshelf hoping that I would buy it for weeks. I finally bought it after the recommendation from a friend. I cannot wait to finally have the chance to read it.

4) The Last Star (The Fifth Wave 3) by Rick Yancey 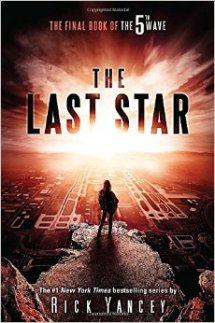 But beneath these riddles lies one truth: Cassie has been betrayed. So has Ringer. Zombie. Nugget. And all 7.5 billion people who used to live on our planet. Betrayed first by the Others, and now by ourselves.

I have been meaning to read this book for so long now! I just want to know how the series ends. But the only problem is that I have to be in a certain mood to read books of this genre so I really hope I’m in that mood soon.

5) The Unexpected Everything by Morgan Matson 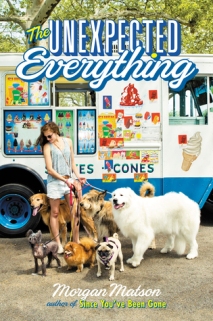 “Andie had it all planned out. When you are a politician’s daughter who’s pretty much raised yourself, you learn everything can be planned or spun, or both. Especially your future. Important internship? Check. Amazing friends? Check. Guys? Check (as long as we’re talking no more than three weeks).

But that was before the scandal. Before having to be in the same house with her dad. Before walking an insane number of dogs. That was before Clark and those few months that might change her whole life. Because here’s the thing—if everything’s planned out, you can never find the unexpected. And where’s the fun in that?

I bought this book a while back hoping to read it on my summer holiday because it was the perfect summer read. But I didn’t get the chance so I really hope to read this in the summer of 2017. 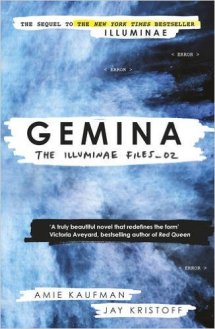 “Moving to a space station at the edge of the galaxy was always going to be the death of Hanna’s social life. Nobody said it might actually get her killed.

The sci-fi saga that began with the breakout bestseller Illuminae continues on board the Jump Station Heimdall, where two new characters will confront the next wave of the BeiTech assault.

Hanna is the station captain’s pampered daughter; Nik the reluctant member of a notorious crime family. But while the pair are struggling with the realities of life aboard the galaxy’s most boring space station, little do they know that Kady Grant and the Hypatia are headed right toward Heimdall, carrying news of the Kerenza invasion.

When an elite BeiTech strike team invades the station, Hanna and Nik are thrown together to defend their home. But alien predators are picking off the station residents one by one, and a malfunction in the station’s wormhole means the space-time continuum might be ripped in two before dinner. Soon Hanna and Nik aren’t just fighting for their own survival; the fate of everyone on the Hypatia—and possibly the known universe—is in their hands.

But relax. They’ve totally got this. They hope.”

I need to read both of the Illuminae Files books before the third one is released. I have heard nothing but great things about these books and cannot wait to give them a read. 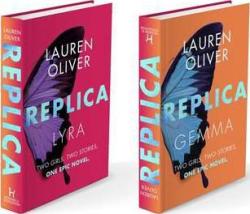 “Lyra’s story begins in the Haven Institute, a building tucked away on a private island off the coast of Florida that from a distance looks serene and even beautiful. But up close the locked doors, military guards, and biohazard suits tell a different story. In truth, Haven is a clandestine research facility where thousands of replicas, or human models, are born, raised, and observed. When a surprise attack is launched on Haven, two of its young experimental subjects—Lyra, or 24, and the boy known only as 72—manage to escape.

Gemma has been in and out of hospitals for as long as she can remember. A lonely teen, her life is circumscribed by home, school, and her best friend, April. But after she is nearly abducted by a stranger claiming to know her, Gemma starts to investigate her family’s past and discovers her father’s mysterious connection to the secretive Haven research facility. Hungry for answers, she travels to Florida, only to stumble upon two replicas and a completely new set of questions.”

This is another book I have been looking forward to reading for a long time. The concept of this book is brilliant. Having to flip the book over to read the different stories. I cannot wait to give it a read.

8) The Sun is Also a Star by Nicola Yoon 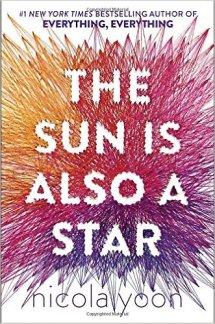 “Natasha: I’m a girl who believes in science and facts. Not fate. Not destiny. Or dreams that will never come true. I’m definitely not the kind of girl who meets a cute boy on a crowded New York City street and falls in love with him. Not when my family is twelve hours away from being deported to Jamaica. Falling in love with him won’t be my story.

Daniel: I’ve always been the good son, the good student, living up to my parents’ high expectations. Never the poet. Or the dreamer. But when I see her, I forget about all that. Something about Natasha makes me think that fate has something much more extraordinary in store—for both of us.

The Universe: Every moment in our lives has brought us to this single moment. A million futures lie before us. Which one will come true?”

I loved Nicola Yoon’s first novel and have just started reading this novel of hers. She is a fantastic author and I cannot wait to see what this book has in store. 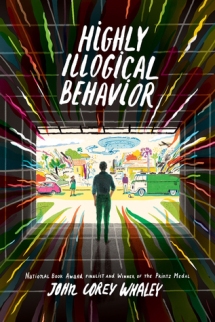 “Sixteen-year-old Solomon is agoraphobic. He hasn’t left the house in three years, which is fine by him.

Ambitious Lisa desperately wants to get into the second-best psychology program for college (she’s being realistic). But is ambition alone enough to get her in?

Determined to “fix” Sol, Lisa steps into his world, along with her charming boyfriend, Clark, and soon the three form an unexpected bond. But, as Lisa learns more about Sol and he and Clark grow closer and closer, the walls they’ve built around themselves start to collapse and their friendships threaten to do the same.”

This is another book I took on holiday with me in the summer but never got the chance to read. I will definitely be giving this a read in 2017.

10) The Haters by Jesse Andrews 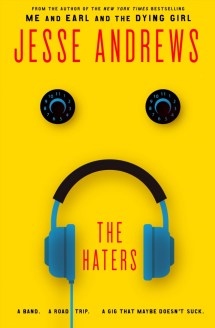 “For Wes and his best friend, Corey, jazz camp turns out to be lame. It’s pretty much all dudes talking in Jazz Voice. But then they jam with Ash, a charismatic girl with an unusual sound, and the three just click. It’s three and a half hours of pure musical magic, and Ash makes a decision: They need to hit the road. Because the road, not summer camp, is where bands get good. Before Wes and Corey know it, they’re in Ash’s SUV heading south, and The Haters Summer of Hate Tour has begun.

In his second novel, Andrews again brings his brilliant and distinctive voice to YA, in the perfect book for music lovers, fans of The Commitments and High Fidelity, or anyone who has ever loved—and hated—a song or a band. This witty, funny coming-of-age novel is contemporary fiction at its best.”

This is another book that I really looked forward to the release of and got it as soon as it came out. I didn’t have the time to read it in 2016 but will hopefully in 2017.