Hello all and welcome to another Top Ten Tuesday! This weeks topic is top ten Graphic novels/ Comics. Top Ten Tuesday is a weekly meme hosted the The Broke and the Bookish.

“There’s a new rule in the galaxy: No one touches Earth!

But why has Earth suddenly become the most important planet in the galaxy? That’s what the Guardians of the Galaxy are going to find out!

Join Star-Lord, Gamora, Drax, Rocket Raccoon, Groot and–wait for it–the Invincible Iron Man as they embark upon one of the most explosive and eye-opening chapters of Marvel NOW! The secrets these galactic Avengers discover will rattle Marvel readers for years to come! But while London deals with a brutal invasion by the Badoon, the fate of the Guardians may have already been decided millions of miles away! Why wait for the movie? It all starts here!”

I bought this comic book whilst on holiday in New York a few years ago, there was an offer on comic books that I could not refuse. I remember taking it onto the plane with me on the way home to read. Just as I opened it the on-flight entertainment began which just happened to be the film of Guardians of the Galaxy. I love both and would really recommend this comic book to any Marvel fans out there.

“One Christmas Eve, after being particularly cruel to his employee, the miserly Ebenezer Scrooge is visited by the ghost of his dead business partner, Jacob Marley, who tells him that he will be visited by the ghosts of Christmas Past, Present, Future. Each ghost shows him things that rekindle the joy and spirit of Christmas within his heart and awaken his goodwill toward his fellow man. In typical fashion, Dickens deals with social injustice in a way that transcends the 19th century. This illustrated version of the classic holiday tale is brought to life with an illustrated Character List (like a Dramatis Personae), 134 pages of colour story artwork, and fascinating support material that details the life and work of Charles Dickens as well as information on Victorian England.”

I didn’t know that this book exist as a Graphic novel until Christmas. I received a copy of it from David’s parents as they both know I have a love for graphic novels. I sat and started at it for a good 10 minutes in awe that a classic book had been made into a graphic novel. I would never have read A Christmas Carol if I was just handed the original book as I am not a huge fan of classics. But this made me really want to read it in the form of a graphic novel! I am really looking forward to finally reading this.

“Thor is back! And in a story only J. Michael Straczynski could tell! Returned to the pantheon of great Marvel heroes, the Asgardian God of Thunder is reunited with the mortal form of Dr. Don Blake. Together, they must reckon with the legacy of the mythic Norse kingdom and the awakening of its immortal heroes – but in a world that may not want them back!

This is one of the other comics that I bought whilst in New York. Thor is one of my favourite superheros so I felt as though I should give his comic a read. I read it in one sitting. I am a huge fan of superheros, especially Marvel superheros so this was the perfect read for me. 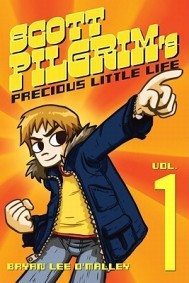 “Scott Pilgrim’s life is totally sweet. He’s 23 years old, he’s in a rockband, he’s “between jobs” and he’s dating a cute high school girl. Nothing could possibly go wrong, unless a seriously mind-blowing, dangerously fashionable, rollerblading delivery girl named Ramona Flowers starts cruising through his dreams and sailing by him at parties. Will Scott’s awesome life get turned upside-down? Will he have to face Ramona’s seven evil ex-boyfriends in battle? The short answer is yes. The long answer is Scott Pilgrim, Volume 1: Scott Pilgrim’s Precious Little Life”

This is a graphic novel I have been meaning to read for a very long time. I watched the film adaptation a couple of years ago and loved it and meant to pick up the graphic novels straight after. I never got round to it, but one of my university friends is obsessed with it and keeps trying to get me to read them. So, I will be getting round to finally picking up a copy of the first volume this year and giving it a read.

5) The Walking Dead, Book One by Robert Kirkman

“This hardcover features the first 12 issues of the hit series along with the covers for the issues in one oversized hardcover volume. Perfect for long time fans, new readers and anyone needing a slightly heavy object with which to fend off the walking dead.”

I am a huge fan of the TV series The Walking Dead and wanted to become a fan of the comics. So, when I received this for a birthday a few years ago I read it instantly and loved it. I actually enjoyed it a lot more than the TV series so I think I will be buying more of them as time goes on and reading them instead of watching the show because I lots interest in the TV show at the beginning of season 7.

“Katie’s got it pretty good. She’s a talented young chef, she runs a successful restaurant, and she has big plans to open an even better one. Then, all at once, progress on the new location bogs down, her charming ex-boyfriend pops up, her fling with another chef goes sour, and her best waitress gets badly hurt. And just like that, Katie’s life goes from pretty good to not so much. What she needs is a second chance. Everybody deserves one, after all—but they don’t come easy. Luckily for Katie, a mysterious girl appears in the middle of the night with simple instructions for a do-it-yourself do-over:

And just like that, all the bad stuff never happened, and Katie is given another chance to get things right. She’s also got a dresser drawer full of magical mushrooms—and an irresistible urge to make her life not just good, but perfect. Too bad it’s against the rules. But Katie doesn’t care about the rules—and she’s about to discover the unintended consequences of the best intentions.”

The Graphic novel section in my local book store is right next to the young adult section so I am always looking at both. This graphic novel stood out to me as soon as it was released. Something about it on the shelf drew me in. The pictures instead are beautiful and the storyline is intriguing to me. due to graphic novels being as expensive as they are I have yet to pick up a copy of this but will be doing soon. I hear nothing but great things about Bryan Lee O’Malley so I am sure I won’t be let down.

7) Adulthood is a Myth by Sarah Andersen

“Are you a special snowflake?

Do you enjoy networking to advance your career?

Is adulthood an exciting new challenge for which you feel fully prepared?

This book is for the rest of us. These comics document the wasting of entire beautiful weekends on the internet, the unbearable agony of holding hands on the street with a gorgeous guy, dreaming all day of getting home and back into pajamas, and wondering when, exactly, this adulthood thing begins. In other words, the horrors and awkwardnesses of young modern life.”

I saw the images from this graphic novel floating around Tumblr not so long ago and was drawn in by the drawing style. I finally found out who these drawing came from and read more into Sarah Andersen. This book is perfect for me I am just on the borderline for what is classes as an “adult” at 19 and I am terrified about not knowing exactly what I want to do in life. So, I was drawn into this book as I felt it would give me some comedic reassurance that adulthood isn’t all bad.

8) Diary of a Wimpy Kid by Jeff Kinney

“It’s a new school year, and Greg Heffley finds himself thrust into middle school, where undersized weaklings share the hallways with kids who are taller, meaner, and already shaving. The hazards of growing up before you’re ready are uniquely revealed through words and drawings as Greg records them in his diary.

In book one of this debut series, Greg is happy to have Rowley, his sidekick, along for the ride. But when Rowley’s star starts to rise, Greg tries to use his best friend’s newfound popularity to his own advantage, kicking off a chain of events that will test their friendship in hilarious fashion.”

This was one of my favourite book series as a child. I remember reading each book in the series quickly. I was always excited to receive the new additions to the series on my birthday and at Christmas. They always made me laugh out loud and I really enjoyed the illustrations in each book. I would really recommend these books to anyone with Children or those who fancy a bit of a laugh.

This is another of Bryan Lee O’Malley’s graphic novels that really stands out to me. Not only is the storyline really interesting but I am really draw into it by the illustrations. They are so simple but so stunning. I like how something so simplistic can have such an impact on a book and I will definitely be giving it a read soon!

10) V for Vendetta by Alan Moore

“Remember, remember the fifth of November…

A frightening and powerful tale of the loss of freedom and identity in a chillingly believable totalitarian world, V for Vendetta stands as one of the highest achievements of the comics medium and a defining work for creators Alan Moore and David Lloyd.

Set in an imagined future England that has given itself over to fascism, this groundbreaking story captures both the suffocating nature of life in an authoritarian police state and the redemptive power of the human spirit which rebels against it. Crafted with sterling clarity and intelligence, V for Vendetta brings an unequaled depth of characterisation and verisimilitude to its unflinching account of oppression and resistance.”

I have heard an awful lot about this graphic novel but never bothered to look into it until now. This storyline really captures my interest as well as David’s. He has recently just finished reading 1984 (one of his favourite novels) and had never heard of this until now, but was interested as it seems to have a similar concept to 1984.

There you have it, this weeks Top Ten Tuesday, Graphic Novels/ Comics! I really enjoyed this topic as I do not get to talk about my love for Graphic Novels that often. Let us know in the comments below any graphic novels you enjoyed and would recommend .