Hey guys, it is both of us today. We are here with another book tag! We were tagged by the lovely Meghan @ WhimsicallyMeghan in the Zombie Book Tag. Go and check out her blog for all things books, plus she is extremely wonderful too. Thank you so much Meghan for the tag! Let’s get on with it. 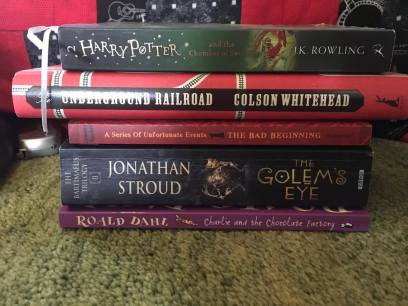 The First Person to Die:

We could have done with her alive. She could of helped if either of us were injured or needed medical help. But seen as she dies first, we best get learning first aid!

The Person You Trip to Escape the Zombies:

Neither of us can see this happening at all. We both love the character of Professor Mcgonagall so we couldn’t see either of us tripping her over. But if it came down to it I guess we would do.

The Person that Trips You to Get Away from the Zombies:

This isn’t like the character of Cora at all. She is a very selfless individual so neither of us can see this happening at all, she would rather die for the team.

This really doesn’t fits Caesars character as he was a lot more educated than the average slave. He also plans their initial escape so we both feel as though Caesar being the team idiot would not help us at all.

The Brains of the Group:

This is very much like the character of Klaus and it would be extremely helpful to have as the brains of the group. He would know what to do in tricky situations as well as knowing quotes to cheer up the team.

We both think we would actually do quite well having Violet as our team medic. Even if she did not know exactly what the best way to fix an injure was, she would definitely be seen making an invention to stop injuries!

This would be extremely useful to have in a team in a zombie apocalypse. He is an expert with magic and it is very accurate to his actual character so we wouldn’t be in trouble if this happened.

We don’t think this would too bad to have him as team brawler. It would be quite helpful to have someone else strong to brawl when it was needed.

The First to Turn into a Zombie:

We can oddly see this happening. He would be trying to do something clever and it would fail completely and he would be caught and turned into a Zombie. Plus, it might actually be better that he was turned first because he would likely have gotten us all killed if he stayed in the team.

And Finally, the Team Leader:

There you have it, the Zombie Book Tag. Thank you so much to Meghan for the tag. Feel free to join in on this tag. It was definitely a fun one to do!

10 thoughts on “The Zombie Book Tag”

Leave a Reply to This Mundane Teenage Life Cancel reply