Hello all and welcome to another Top Ten Tuesday! This weeks topic is books I wouldn’t mind Santa leaving under my tree. Top Ten Tuesday is a weekly meme hosted the The Broke and the Bookish.

So without further ado, here is this weeks top ten Tuesday, books I wouldn’t mind Santa leaving under my tree.

1) Parsnips: Buttered: How to Baffle, bamboozle and boycott your way through modern life by Joe Lycett 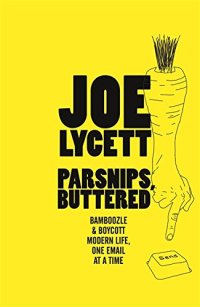 Life is hard. We are a bombarded generation: Facebook, billboards, Twitter, Instagram, taxes, newspapers, watches monitoring our sleep, apps that read our pulse, terrorism. There’s such an onslaught to the senses these days it’s a marvel any of us manage to get out of bed. I love bed.

While we are overwhelmed and confused by the miasmic cloud of information, there are those that seek to take advantage: there are parking fines, hate Tweets, Nigerian email scams and Christmas newsletters from old school friends about their ugly kids. And just as we’re getting round to doing something about it, we’re distracted again.

I, Joe Lycett, comedian, wordsmith, and professional complainer, am here to help. During my short life of doing largely nothing I’ve discovered solutions to many of life’s problems, which I impart to you, dear Reader. Containing a centurion of complaint letters to unsuspecting celebrities, companies and anyone brave enough to clog up my phone, as well as illustrations, one-liners , jokes and life hacks, this little gem offers you a collection of tips and advice* for all manner of modern woe. By the time you have finished reading this book you will have learnt how to:

Joe Lycett is a British comedian who never fails to make me laugh. I have been looking for his book in shops for a long time now and haven’t been able to find it. I know it would be a book that would cheer me right up and keep be going through the day. So I really wouldn’t mind having this book left under my tree after looking for it for so long.

Katelyn is the first, but she won’t be the last teenager to blow up without warning or explanation. As the seniors continue to pop like balloons and the national eye turns to Mara’s suburban New Jersey hometown, the FBI rolls in and the search for a reason is on.

Whip-smart and blunt, Mara narrates the end of their world as she knows it while trying to make it to graduation in one piece. It’s an explosive year punctuated by romance, quarantine, lifelong friendship, hallucinogenic mushrooms, bloggers, ice cream trucks, “Snooze Button™,” Bon Jovi, and the filthiest language you’ve ever heard from the President of the United States.”

This book has yet to come out in England and I have been looking for it for month. John Green mentioned it on one of his YouTube videos and I was immediately interested. I searched and searched and found out it wasn’t going to be released in England until 2017. So I am playing a waiting game for this book. But I would be extremely happy if Santa left this book under my tree this year to surprise me.

3) History is All You Left Me by Adam Silvera

To make things worse, the only person who truly understands his heartache is Jackson. But no matter how much they open up to each other, Griffin’s downward spiral continues. He’s losing himself in his obsessive compulsions and destructive choices, and the secrets he’s been keeping are tearing him apart.

If Griffin is ever to rebuild his future, he must first confront his history, every last heartbreaking piece in the puzzle of his life.”

I have heard so many good things from other people about this book and its author. I know it isn’t released until January of next year but I would love to have a copy under my tree that I could read over the Christmas holidays. I know I will be getting it when it comes out in January though.

4) The Upside of Unrequited by Becky Albertalli

“Seventeen-year-old Molly Peskin-Suso knows all about unrequited love. No matter how many times her twin sister, Cassie, tells her to woman up, Molly can’t stomach the idea of rejection. So she’s careful. Fat girls always have to be careful.

Then a cute new girl enters Cassie’s orbit, and for the first time ever, Molly’s cynical twin is a lovesick mess. Meanwhile, Molly’s totally not dying of loneliness—except for the part where she is. Luckily, Cassie’s new girlfriend comes with a cute hipster-boy sidekick. If Molly can win him over, she’ll get her first kiss and she’ll get her twin back.

There’s only one problem: Molly’s coworker, Reid. He’s a chubby Tolkien superfan with a season pass to the Ren Faire, and there’s absolutely no way Molly could fall for him.

This is another book I have heard so many good things about. As well as its author. I know again this book isn’t released until April of 2017 but I would absolutely love a copy of this book to read over the Christmas holidays. So, even though this book isn’t going to be released for a long time I would love to be lucky enough to get a copy under my tree this Christmas.

5) Simon vs. the Homo Sapiens Agenda by Becky Albertalli

“Sixteen-year-old and not-so-openly gay Simon Spier prefers to save his drama for the school musical. But when an email falls into the wrong hands, his secret is at risk of being thrust into the spotlight. Now Simon is actually being blackmailed: if he doesn’t play wingman for class clown Martin, his sexual identity will become everyone’s business. Worse, the privacy of Blue, the pen name of the boy he’s been emailing, will be compromised.

With some messy dynamics emerging in his once tight-knit group of friends, and his email correspondence with Blue growing more flirtatious every day, Simon’s junior year has suddenly gotten all kinds of complicated. Now, change-averse Simon has to find a way to step out of his comfort zone before he’s pushed out—without alienating his friends, compromising himself, or fumbling a shot at happiness with the most confusing, adorable guy he’s never met.”

There you have it, my top 10 Tuesday, books I wouldn’t mind Santa leaving under my tree. I know I have only done 5 books for this weeks top ten Tuesday, I’m sorry about that I just couldn’t think of any other books right now. So please let me know in the comments below any book suggestions for me to get this year and to look forward to next year as well as links to your top ten Tuesday!