Hello all, and Happy New Year! I am so sorry I haven’t posted in nearly 2 weeks! I have been so busy this Christmas with family and friends and I just haven’t had the time I wish I had to post on here. But I am hopefully back now and going to post as much as I can. I have really missed blogging! Due to not posting for nearly 2 weeks this wrap-up is one I am not that happy with. I really wish I had more time this month to post on here.

Lets get on with this wrap-up and TBR!

I have actually read quite a few books this month! I also completed by 2016 Goodreads Reading Challenge which I am really happy about. In 2015 I only read 12 books but in 2016 I read 36 books which is a big achievement for me!

1. Harry Potter and the Philosopher’s Stone by J.K Rowling

“Harry Potter’s life is miserable. His parents are dead and he’s stuck with his heartless relatives, who force him to live in a tiny closet under the stairs. But his fortune changes when he receives a letter that tells him the truth about himself: he’s a wizard. A mysterious visitor rescues him from his relatives and takes him to his new home, Hogwarts School of Witchcraft and Wizardry.

After a lifetime of bottling up his magical powers, Harry finally feels like a normal kid. But even within the Wizarding community, he is special. He is the boy who lived: the only person to have ever survived a killing curse inflicted by the evil Lord Voldemort, who launched a brutal takeover of the Wizarding world, only to vanish after failing to kill Harry.

Though Harry’s first year at Hogwarts is the best of his life, not everything is perfect. There is a dangerous secret object hidden within the castle walls, and Harry believes it’s his responsibility to prevent it from falling into evil hands. But doing so will bring him into contact with forces more terrifying than he ever could have imagined.”

“There’s a new rule in the galaxy: No one touches Earth!

But why has Earth suddenly become the most important planet in the galaxy? That’s what the Guardians of the Galaxy are going to find out!

Join Star-Lord, Gamora, Drax, Rocket Raccoon, Groot and–wait for it–the Invincible Iron Man as they embark upon one of the most explosive and eye-opening chapters of Marvel NOW! The secrets these galactic Avengers discover will rattle Marvel readers for years to come! But while London deals with a brutal invasion by the Badoon, the fate of the Guardians may have already been decided millions of miles away! Why wait for the movie? It all starts here!”

“This hardcover features the first 12 issues of the hit series along with the covers for the issues in one oversized hardcover volume. Perfect for long time fans, new readers and anyone needing a slightly heavy object with which to fend off the walking dead.” 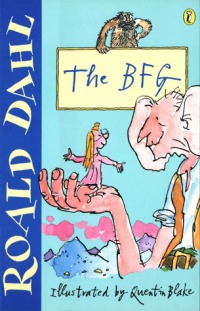 4. The BFG by Roald Dahl

“Captured by a giant! The BFG is no ordinary bone-crunching giant. He is far too nice and jumbly. It’s lucky for Sophie that he is. Had she been carried off in the middle of the night by the Bloodbottler, the Fleshlumpeater, the Bonecruncher, or any of the other giants-rather than the BFG-she would have soon become breakfast.

When Sophie hears that they are flush-bunking off in England to swollomp a few nice little chiddlers, she decides she must stop them once and for all. And the BFG is going to help her!”

5. The Nixie’s Song (Beyond The Spiderwick Chronicles 1) by Holly Black

“The Spiderwick Chronicles leave the old-fashioned charm of New England far behind and head south for some fiendish faerie fun in the hot Florida sun. Eleven-year-old Nicholas Vargas only thinks his life has been turned upside down after his developer father remarries and moves his new wife and daughter into the soon-to-be completed Mangrove Hollow.

But an “expedition” to a nearby lake turns up a little nixie with a giant problem – the huge, lumbering, fire-breathing variety – and it’s up to Nick; his stepsister, Laurie; and his big brother, Julian (plus a familiar face from the original Spiderwick Chronicles) to figure out the best way to stop a host of rampaging giants before all of Florida goes up in smoke.”

6. A Giant Problem (Beyond the Spiderwick Chronicles 2) By Holly Black

“Talk about out of the frying pan, into the fire! I was pretty sure that my freaky stepsister and that freaky field guide of hers would ruin my life. But now it looks like they’re going to ruin all of Florida, too! Okay, maybe that’s not fair. Maybe all these stupid giants would be waking up anyway, but if it wasn’t for her and that book, I’d be home playing video games and this would be someone else’s giant problem!”

I am really disappointed with how much I have posted on the blog this month. I just really haven’t had the time! I just hope next month is a lot better than this month.

Top Ten Tuesday: Book I am Looking Forward to Reading in the First Half of 2017!

This month I have a few books I have to read to review. I also want to continue my re-reading of Harry Potter as always. Here is a list of books I hope to read this month.

The Edge of Juniper by Lora Ricardson

The Sun is Also a Star by Nicola Yoon

All I Ever Wanted by Lucy Dillon

The Hundred Lies of Lizzie Lovett by Chelsea Sedoti

The One Memory of Flora Banks by Emily Barr

This is so much reading but I really hope that I do it!

Wish me luck! I may struggle getting all this reading done by the end of the month but we shall find out in a month’s time

What are your reading plans for this month?