Without further ado, here are my top 5 favourite underrated books. 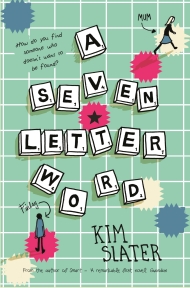 “My name is Finlay McIntosh. I can see OK, can hear perfectly fine and I can write really, really well. But the thing is, I can’t speak. I’m a st-st-st-stutterer. Hilarious, isn’t it? It’s like the word is there in my mouth, fully formed and then, just as it’s ready to leave my lips . . . POP! It jumps and ricochets and bounces around my gob. Except it isn’t funny at all, because there’s not a thing I can do about it.’

Finlay’s mother vanished two years ago. And ever since then his stutter has become almost unbearable. Bullied at school and ignored by his father, the only way to get out the words which are bouncing around in his head is by writing long letters to his ma which he knows she will never read, and by playing Scrabble online. But when Finlay is befriended by an online Scrabble player called Alex, everything changes. Could it be his mother secretly trying to contact him? Or is there something more sinister going on?”

I read this book last year whilst on holiday and I loved it. I reviewed it as soon as I could because I had so much to say about it. It is the perfect coming-of-age story for a young boy with a stutter. Kim Slater is an astonishing author who doesn’t get the amount of credit she deserves for her writing. Her stories are unique and should be known by more people than they are currently. I really recommend picking this book up and giving it a read.

2) On the Other Side by Carrie Hope Fletcher 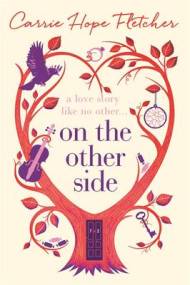 “A love story like no other, this is the debut novel from Carrie Hope Fletcher, author of the Sunday Times No. 1 bestseller All I Know Now.

Evie Snow is eighty-two when she quietly passes away in her sleep, surrounded by her children and grandchildren. It’s the way most people wish to leave the world but when Evie reaches the door of her own private heaven, she finds that she’s become her twenty-seven-year-old self and the door won’t open.

Evie’s soul must be light enough to pass through so she needs to get rid of whatever is making her soul heavy. For Evie, this means unburdening herself of the three secrets that have weighed her down for over fifty years, so she must find a way to reveal them before it’s too late. As Evie begins the journey of a lifetime, she learns more about life and love than she ever thought possible, and somehow , some way, she may also find her way back to her long lost love . . .”

This is another book I read whilst on holiday last year and reviewed it as soon as I could. It is written by the YouTuber Carrie Hope Fletcher who is the younger sister of Tom Fletcher a band member in the well-known band McFly. This book is another book that I don’t think got the credit that it deserved. There was a lot of hype around this book before it came out but not many people talked about it after it was released. It is such a unique book that should have more worldwide recognition especially with the writing talent that Carrie Hope Fletcher has.

3) Faceless by Alyssa B. Sheinmel 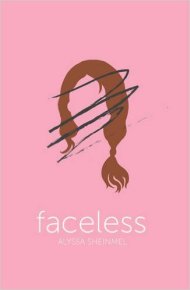 “When Maisie Winters wakes up, she’s in the hospital.

The last thing she remembers is running through the hills of her neighborhood one misty morning. Slowly, she puts the pieces together. Before she could make it home, a storm gathered. Lightning hit a power line and sparks rained down, the hot-burning electrical fire consuming her. Destroying her face. Where her nose, cheeks, and chin used to be, now there is…nothing.

Maisie’s lucky enough to qualify for a rare medical treatment: a face transplant. At least, everyone says she’s lucky. But with someone else’s features staring back at her in the mirror, Maisie looks—and feels—like a stranger. The doctors promised that the transplant was her chance to live a normal life again, but nothing feels normal anymore. Before, she knew who she was—a regular girl who ran track and got good grades, who loved her boyfriend and her best friend. Now, she can’t even recognize herself.”

This is one book I keep reading over and over again.There is a reason for this, it is incredible! The story is so moving and life changing and is written so beautifully.I have read both the physical book and also listened to the audio book. Both of which I loved. I think more people should know that this book exists as well as reading this book. I talk about this book on a lot on this book. But this is because of how much this book actually means to me. I turn to this book when I am feeling bad. I really recommend this book and I really wish that Alyssa Shienmel would get the credit she deserves.

“When the entire high school finds out that Hannah Shepard is pregnant via her ex-best friend, she has a full-on meltdown in her backyard. The one witness (besides the rest of the world): Aaron Tyler, a transfer student and the only boy who doesn’t seem to want to get into Hannah’s pants. Confused and scared, Hannah needs someone to be on her side. Wishing to make up for his own past mistakes, Aaron does the unthinkable and offers to pretend to be the father of Hannah’s unborn baby. Even more unbelievable, Hannah hears herself saying “yes.””

I read this book a couple of years ago and I still remember the looks I got when I read it in public. The cover made a lot of people do double-takes that is for certain. Once you get past the people constantly giving you concerned looks when you are reading this in public this book is amazing. I would really recommend this book to any young adult fans. It is another book that I think does not get the credit that it deserves. I remember reading this book so fast and loving it. I want to read this book again sometime and review it so that I can spread my love for this book even more.

5) Am I Normal Yet? by Holly Bourne 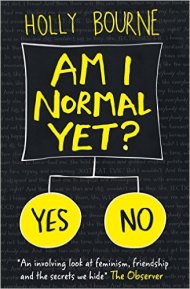 “All Evie wants is to be normal. She’s almost off her meds and at a new college where no one knows her as the girl-who-went-crazy. She’s even going to parties and making friends. There’s only one thing left to tick off her list…

But relationships are messy – especially relationships with teenage guys. They can make any girl feel like they’re going mad. And if Evie can’t even tell her new friends Amber and Lottie the truth about herself, how will she cope when she falls in love?”

This book is a book I have yet to read but have heard so many great things about. It is part of the trilogy that is the Spinster Club series. This book and all the others it it’s series talk about mental health, feminism, love, relationships and many more things. I really want to read all of the books in this series hopefully this year. I have heard nothing but great things about these books and their author. It doesn’t have many ratings on Goodreads and I think that should change. Holly Bourne’s books talk about topics that are extremely relevant in this day and age.