I have been struggling to read anything this month thanks to a wonderful reading slump. This hasn’t stopped me from working out what books I want to read in the rest of 2018. I am hoping to get a lot more books read before the end of the year. Here are just a few of them. 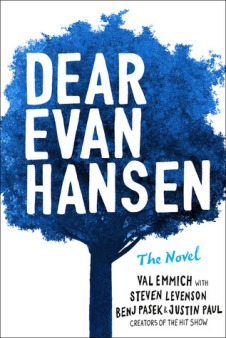 When a letter that was never meant to be seen by anyone draws high school senior Evan Hansen into a family’s grief over the loss of their son, he is given the chance of a lifetime: to belong. He just has to stick to a lie he never meant to tell, that the notoriously troubled Connor Murphy was his secret best friend.

Suddenly, Evan isn’t invisible anymore–even to the girl of his dreams. And Connor Murphy’s parents, with their beautiful home on the other side of town, have taken him in like he was their own, desperate to know more about their enigmatic son from his closest friend. As Evan gets pulled deeper into their swirl of anger, regret, and confusion, he knows that what he’s doing can’t be right, but if he’s helping people, how wrong can it be?

I have been excited to read this book for a long time! I cannot wait to read it in the next half of the year. I love the musical and the idea of a book based on the musical sounds perfect to me.

At seventeen, Mei should be in high school, but skipping fourth grade was part of her parents’ master plan. Now a freshman at MIT, she is on track to fulfill the rest of this predetermined future: become a doctor, marry a preapproved Taiwanese Ivy Leaguer, produce a litter of babies.

With everything her parents have sacrificed to make her cushy life a reality, Mei can’t bring herself to tell them the truth–that she (1) hates germs, (2) falls asleep in biology lectures, and (3) has a crush on her classmate Darren Takahashi, who is decidedly not Taiwanese.

This is another book I’ve been meaning to read for a long time. I kept seeing it in Waterstones but I never picked it up. At the latest TEENSgate blogger event it was on the book swap and I knew I had to pick it up.

What If It’s Us by Becky Albertalli and Adam Silvera

Arthur is only in New York for the summer, but if Broadway has taught him anything, it’s that the universe can deliver a showstopping romance when you least expect it.

Ben thinks the universe needs to mind its business. If the universe had his back, he wouldn’t be on his way to the post office carrying a box of his ex-boyfriend’s things.

But when Arthur and Ben meet-cute at the post office, what exactly does the universe have in store for them?

Maybe nothing. After all, they get separated.

Maybe everything. After all, they get reunited.

I love both Becky and Adam’s work, so I was super excited to find out that they had written a book together. I love both of their writing and I’m really hoping that they work excellently together. I’m sure they will!

No Fixed Address by Susin Nielsen

Felix Knuttson, twelve, is an endearing kid with an incredible brain for trivia. His mom Astrid is loving but unreliable; she can’t hold onto a job, or a home. When they lose their apartment in Vancouver, they move into a camper van, just for August, till Astrid finds a job. September comes, they’re still in the van; Felix must keep “home” a secret and give a fake address in order to enroll in school.

I got a proof of this book way back in April and have been meaning to read it ever since. I love Susin Nielsen’s other books and I feel that this book and the topic of homelessness that it cover will be heartbreaking. I am ready to give it a read!

That is just a few of the books I am hoping to read in the rest of 2018. What books are you hoping to read? Let me know in the comments below.