“Three years ago Tanner Scott’s family relocated from California to Utah, a move that nudged the bisexual teen temporarily back into the closet. Now, with one semester of high school to go and no obstacles between him and out-of-state college freedom, Tanner plans to coast through his remaining classes and clear out of Utah.

But when his best friend, Autumn, dares him to take Provo High’s prestigious Seminar – where honour roll students diligently toil to draft a book in a semester – Tanner can’t resist going against his better judgement and having a go, if only to prove to Autumn how silly the whole thing is. Writing a book in four months sounds simple. Four months is an eternity.

It turns out, Tanner is only partly right: four months is a long time. After all, it takes only one second for him to notice Sebastian Brother, the Mormon prodigy who sold his own Seminar novel the year before and who now mentors the class. And it takes less than a month for Tanner to fall completely in love with him.”

I had weirdly never heard of Christina Lauren before I downloaded my copy of this audiobook. As soon as I read the synopsis of this book I knew I had to give it a listen. I was not let down by this book at all. It is a heart-breaking but must listen to YA LGBTQ+ story. This audiobook is 9 hours and 19 minutes long and is well worth the listen!

“The year is 2575, and two megacorporations are at war over a planet that’s little more than an ice-covered speck. Too bad nobody thought to warn the people living on it. With enemy fire raining down on them, Ezra and Kady have to make their escape on the evacuating fleet. But their troubles are just beginning. A deadly plague has broken out on one of the spaceships and is mutating, with terrifying results. Their ship’s protection is seriously flawed.

No one will say what is going on. As Kady hacks in to a tangled web of data to find the truth, it’s clear only one person can help her: Ezra. And the only problem with that is they split up before all this trouble started, and she isn’t supposed to be talking to him.”

This audiobook is extraordinary! I had heard so many amazing things about this audiobook before I went and downloaded it myself and I can tell you it is one of the best audiobooks I have ever listened to. It is such a different take on an audiobook but it is exactly how I feel the book would have come across as if it was a film. I am still blown away by this audiobook whenever I think about it. This audiobook is 11 hours and 40 minutes long and is well worth a listen!

The Problem with Forever by Jennifer L. Armentrout – Narrated by Amy Landon

“For some people, silence is a weapon. For Mallory “Mouse” Dodge, it’s a shield. Growing up, she learned that the best way to survive was to say nothing. And even though it’s been four years since her nightmare ended, she’s beginning to worry that the fear that holds her back will last a lifetime.

Now, after years of homeschooling with loving adoptive parents, Mallory must face a new milestone – spending her senior year at a public high school. But of all the terrifying and exhilarating scenarios she’s imagined, there’s one she never dreamed of – that she’d run into Rider Stark, the friend and protector she hasn’t seen since childhood, on her very first day.”

It seems to be a reoccurring theme that I find new-to-me authors through audiobooks and that is what happened her. This was recommended at the end of listening to another audiobook and after a read of the synopsis I downloaded it immediately. I flew through this audiobook and once I was listening to it I didn’t want to stop. Amy Landon brings Mouse to life and tells her heart-breaking and beautiful story. This audiobook is 14 hours long and is well worth the listen! 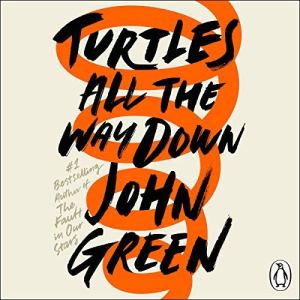 “Sixteen-year-old Aza never intended to pursue the mystery of fugitive billionaire Russell Pickett, but there’s a hundred thousand dollar reward at stake and her Best and Most Fearless Friend, Daisy, is eager to investigate. So together, they navigate the short distance and broad divides that separate them from Russell Pickett’s son, Davis.

Aza is trying. She is trying to be a good daughter, a good friend, a good student, and maybe even a good detective, while also living within the ever-tightening spiral of her own thoughts.”

This book and audiobook hold a special place in my heart and I feel they always will. I am a huge John Green fan and I was one of the people highly antipatiing his return to writing. The wait was well worth it! Kate Rudd brings Aza and her story to life and added so much to my reading experience. This is a very true-to-life story told excellently. This audiobook is 7 hours and 11 minutes long and is well worth the listen.

“Lara Jean Song keeps her love letters in a hatbox her mother gave her. They aren’t love letters that anyone else wrote for her; these are ones she’s written. One for every boy she’s ever loved – five in all. When she writes, she pours out her heart and soul and says all the things she would never say in real life, because her letters are for her eyes only. Until the day her secret letters are mailed, and suddenly, Lara Jean’s love life goes from imaginary to out of control.”

This is a little bonus one for the end of this little series as it is actually 3 audiobooks as it covers all 3 of the books in the To All the Boys series! I actually found out about this series thanks to listening to another audiobook and I am so glad that I found it when I did. I listened to the first and second book in the series within a week of downloading them. Then when the third and final book in the series was released I downloaded thew audiobook immediately and finished it within the day! I have re-listened to these audiobooks multiple times and don’t think I will ever get bored of them. Laura Knight Keating brings Lara Jean to life perfectly and is one of the reasons this series hold a special place in my heart. The To All the Boys I’ve Loved Before audiobook is 8 hours and 22 minutes long. The P.S I Still Love You audiobook is 8 hours and 59 minutes long. The Always and Forever Lara Jean audiobook is 9 hours and 5 minutes long. The series in total is 26 hours and 26 minutes long and is well worth the listen!

What audiobooks do you think are well worth a listen? Let me know in the comments below. Be sure to read part one of this series too!

14 thoughts on “Audiobooks Worth a Listen – Part Two”