Hi all, hope you are doing well. Here we go with this weeks top 5 wednesday

Without further ado, this weeks topic is, characters I’d want as family.

1. Molly Weasley as my Mum

Molly Weasley just seems like a brilliant Mum. She’d make you laugh a lot, look after you and obviously shout at you if you got yourself into trouble. Molly Weasley reminds me a little bit of my Mum so I think it would be perfect.

2. Matilda as my Sister

(From Matilda by Roald Dahl)

3. Albus Dumbledore as my Grandad

Who else thinks that Dumbledore would be an amazing Grandad? He would look after you, pass down his knowledge and just be a wise figure to look up to. He is just an extremely wise character and I would love him to be my Grandad.

4. Evie Snow as my Grandma

(From On the Other Side by Carrie Hope Fletcher) 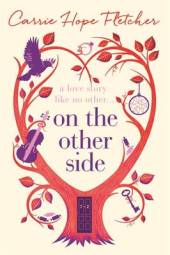 5. Fred and George Weasley as my Brothers

There you have it, this weeks Top 5 Wednesday, characters I’d want as family. There are a lot of Harry Potter characters in this list because of how much I love the series. Comment below characters you’d want as family members and if any of my list are the same as yours.