This year was my first ever time attending YALC which is a Young Adult Literature Convention based in London. I have been watching YALC form afar for the past few years but have never had the chance to attend until this year. YALC has been over for a few days now and I miss it so much.

This weekend was amazing! I got to spend some time with my with wonderful friends. I got to spend more than 2 hours with the lovely Sophie and Sarah from The Little Contemporary Corner. I also made a wonderful new friend Charlotte from Wonderfully Bookish. We spent time together chatting books, blogging, played Bananagrams and attended signings and talks together.

I got to buy a lot of books over the course of the weekend. Some at YALC and a few from Foyles. I am planning on doing a YALC book haul in a couple of days just so I can go into more detail for all the books that I bought!

I think because it was my first year at YALC I didn’t do the planning that I wanted to. I only attended one workshop. I did attend a lot of talks though. I really enjoyed the Space talk and the Real World, Real Me talk. My favourite though was the talk between Tom and Giovanna Fletcher. I love the pair of them but have never seen them at an event together. It was lovely to see them bouncing off one another. I then got to meet Tom and Giovanna after which was excellent.

I also got the chance to get a lot of books signed this year. I got my copy of Floored signed by all the authors. I got to catch up with Beth Garrod the author of Super Awkward and Simon James Green the author of Noah Can’t Even. As well as meet many more wonderful authors. 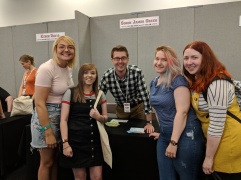 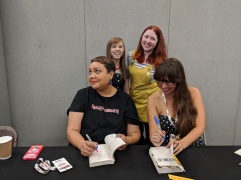 After watching YALC from afar last year I saw a lot of concentration on ARCs. This year there was hardly any which I liked a lot more. People weren’t running for ARCs. The

accessibility still wasn’t the best but it was better with people not running around every where.

I have so many highlights from the whole weekend. These include seeing the Proud book cover reveal with Juno Dawson and Charlie from Stripes (both of them are so lovely). Seeing bloggers I wouldn’t have been able to meet without YALC. Meeting the lovely Stevie a publicist from Usborne who has supported me for a long time. Fangirling over Jason Momoa with Katherine Webber when he walked past us whilst we were chatting.

Last year Benedict Cumberbatch made an appearance at YALC when he walked through the convention floor. This year was the turn of Jason Momoa! He walked through YALC so many times over the weekend. I also got to see Zachery Levi who is in a new DC film, as well as being in a lift with Steven Seagal when I was leaving YALC.

I cam out of the YALC weekend having such an amazing time with friends and meeting so many new bloggers, book lovers and authors. I have had so much fun looking back on all the pictures I took over the weekend! Here are just a couple of my favourites which we took in front of the prom background for Katherine Webber’s new book Only Love Can Break Your Heart. I have to say photo opportunities bring out the weirder side of me.

I will definitely be going to YALC next year if I have the choice and can’t wait to spend more time with Sarah, Sophie and Charlotte.

✨ Where is your favourite place to read? ✨
✨ What is your favourite trope in a book? ✨
✨ What book have you recently picked up thanks to a recommendation? ✨
✨ What is your favourite book series? ✨
Hope you all had a lovely weekend! I'm back to work today and looking to start a new book!
Over the past few days all I've wanted to read has been thrillers. So, I have a question for you. What are some of your favourite thrillers?
Life has felt like a real non-stop whirlwind for the past few weeks. So much has happened yet so little has happened. It has got me thinking about life after lockdown though.
Do you own any special editions of books?
Happy Wednesday! 💜 We are halfway through the week already!
My Tweets