Sydney lives in a small Ohio town where her dad was the only psychiatrist for miles before he unexpectedly died. Could Sydney be crazy in thinking that her day, a man whose entire job revolved around other peoples’ secrets, crashed his car along with no explanation? Also, why is June Copeland, the homecoming queen and the town’s golden child at Sydney’s dad’s funeral? When Sydney and June grow closer in the wake of the accident, not everyone is happy about their new friendship. What is the picture perfect June hiding and does Sydney even want to know? 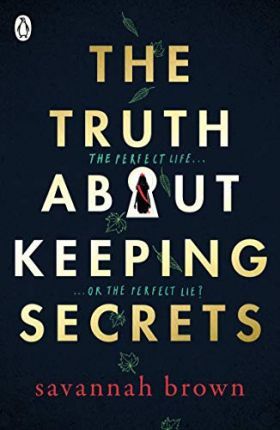 The Truth About Keeping Secrets is such a stunning debut novel! This book covers a lot of intense topics, grief, abuse, sexuality and suicide. This means that this book comes with trigger warnings and won’t be for some people. I had heard of the author Savannah Brown through her YouTube channel and I also was a fan of her poetry. So, when I found out that she was releasing a YA novel I was excited!

When first going into this book you have to let go of an assumption that this is going to be a thriller book, because it is not. Yes, it is a beautifully plotted novel with mystery elements throughout, but it mostly focuses on a portrayal of grief. It tells of a young girls journey through the loss of her father and how she deals with the grief and things she is feeling about his death.

It doesn’t just tackle grief though, it also tackles depression, mental health, male privilege, friendship and abuse. It tackles these subjects incredibly well whilst still feeling real. This book isn’t completely plot-focused and most of the dramatics happen within the last 60 pages. A large percentage of the book is Sydney learning to cope with her father’s death and how falling in love as well as other things helps her with it all. This book is beautifully written, and I enjoyed it a lot. One things I enjoyed a lot was the writing style. I would class the writing style are colloquial but not overly chatty which made me enjoy the book even more.

The cast of characters in this book is very well-drawn. Sydney is an awesome heroine. I just wasn’t a fan about how she handled her friendship with Olivia at times throughout the book. Although I feel this was intentional on the authors part to make you feel like this. I also loved June and Leo, they are just two more incredible characters. The cast of character is also incredibly diverse, with June, Olive, and Leo being people of colour and then Sydney, Leo and June being LGBTQ+.

Overall, this book is excellent, and I will certainly be recommending it to other people! Savannah has created a stunning debut that I couldn’t put down. If you a fan of contemporary YA books with mystery elements weaved in, then this book is for you!

23 thoughts on “The Truth About Keeping Secrets – Savannah Brown”