I am back once again with another film review. If you didn’t know I have recently been watching a YA film adaptation every month and then reviewing it. This month I watched The Perks of Being a Wallflower! This is the film adaptation of the novel of the same name by Stephen Chbosky. I have read the book a couple of times over the years and watched the film more times than I can count. I felt it was only right I finally gave it a proper review! Here is my review! 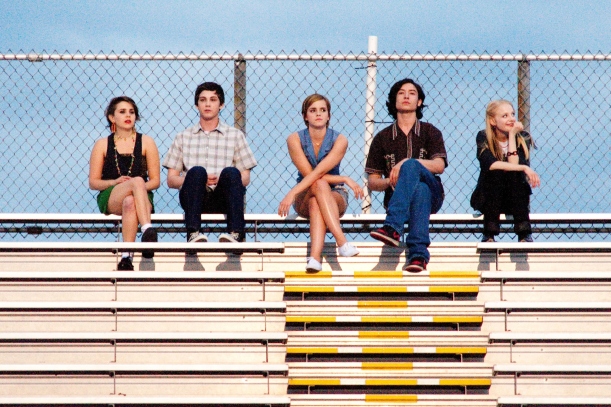 Teenager Charlie is socially awkward and a wallflower, always watching life from the sidelines. This is until two charismatic students become his mentors. Free-spirited Sam and her stepbrother Patrick help Charlie discover the joy of first love, friendship, music and more, all whilst a teacher sparks Charlie’s dreams of becoming a writer. However, as his new friends prepare to leave for college, Charlie’s inner sadness threatens to shatter his newfound confidence.

The last time I read the book this film is based on was back in 2018 and I gave it 4 stars and I am going to give the film the exact same! I throughly enjoyed both of them and I feel like the film really lives up to how incredible the book is. I think this is because the film is written, produced and directed by the books writer, Stephen Chbosky.

The acting in this film is incredibly. Logan Lerman who plays Charlie captures the highs and lows, love and pain and just the sheer awkwardness that Charlie has in the book. I really appreciated how well he plays Charlie. Ezra Miller who plays Patrick and Emma Watson who plays Sam are both extraordinary too. Patrick, a proud gay teenager is shown as just that! Sam is just a wonderful character who is played excellently. The supporting cast of this film does not disappoint you either!

Having watched this film again after very recently watching The Rocky Horror Picture Show, I can appreciate those references so much more now! Those moments in the film when I was rewatching it gave me so much more love fore the characters.

After watching this film again, I am desperate to reread the book all over again. This film and it’s book have a special place in my heart and I feel that will never change! Overall, although I didn’t give this film 5 stars, this doesn’t mean I don’t love this film. I will be rewatching this for years to come and recommending it as much as I can!

13 thoughts on “The Perks of Being a Wallflower – Film Review”