The Loneliest Girl in the Universe by Lauren James

“Romy Silvers is the only surviving crew-member of a spaceship travelling to a new planet, on a mission to establish a second home for humanity amongst the stars. Alone in space, she is the loneliest girl in the universe until she hears about a new ship which has launched from Earth – with a single passenger on board. A boy called J.

Their only communication with each other is via email – and due to the distance between them, their messages take months to transmit across space. And yet Romy finds herself falling in love.

But what does Romy really know about J? And what do the mysterious messages which have started arriving from Earth really mean?”

This is quite literally one of my favourite books of all time. I recommend this book to almost anyone, people on the street, people at the library, when I say almost anyone I really mean it. It is an absolutely extraordinary book that will stay in your thoughts for a long time after you’ve finished it.

I Was Born for This by Alice Oseman 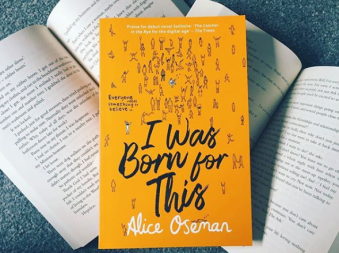 “For Angel Rahimi, life is only about one thing: The Ark – a pop-rock trio of teenage boys who are currently taking the world by storm. Being part of The Ark’s fandom has given her everything – her friendships, her dreams, her place in the world.

Jimmy Kaga-Ricci owes everything to The Ark too. He’s their frontman – and playing in a band is all he’s ever dreamed of doing. It’s just a shame that recently everything in his life seems to have turned into a bit of a nightmare.

Because that’s the problem with dreaming – eventually, inevitably, real life arrives with a wake-up call. And when Angel and Jimmy are unexpectedly thrust together, they will discover just how strange and surprising facing up to reality can be.”

This book came into my life exactly when I needed it to. I loved it to pieces then and I still love it to pieces now. It is a beautiful book full of amazing representation, fandoms and a host of wonderful characters. I highly recommend this one if you haven’t picked it up yet.

To All the Boys I’ve Love Before by Jenny Han

“To All the Boys I’ve Loved Before is the story of Lara Jean, who has never openly admitted her crushes, but instead wrote each boy a letter about how she felt, sealed it, and hid it in a box under her bed.

But one day Lara Jean discovers that somehow her secret box of letters has been mailed, causing all her crushes from her past to confront her about the letters: her first kiss, the boy from summer camp, even her sister’s ex-boyfriend, Josh.

As she learns to deal with her past loves face to face, Lara Jean discovers that something good may come out of these letters after all. ”

Another of my favourite books which is part of one of my favourite series. I could read this book over and over again and never get bored. There is something about this book that always puts a huge smile on my face. Yes, it is hyped up by a lot of people including myself but this book is my happy place and I could talk about it forever.

The Heartstopper Series by Alice Oseman 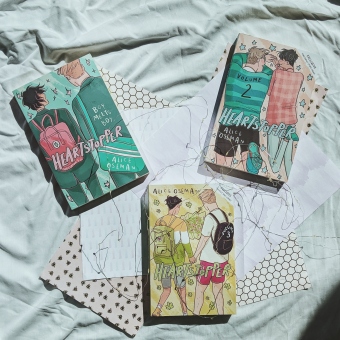 “Charlie Spring is in Year 10 at Truham Grammar School for Boys. The past year hasn’t been too great, but at least he’s not being bullied anymore, and he’s sort of got a boyfriend, even if he’s kind of mean and only wants to meet up in secret.

Nick Nelson is in Year 11 and on the school rugby team. He’s heard a little about Charlie – the kid who was outed last year and bullied for a few months – but he’s never had the opportunity to talk to him. That is, until the start of January, in which Nick and Charlie are placed in the same form group and made to sit together.

They quickly become friends, and soon Charlie is falling hard for Nick, even though he doesn’t think he has a chance. But love works in surprising ways, and sometimes good things are waiting just around the corner…”

This series is adorable, sweet and all the things anyone needs in their lives to make them smile. The artwork in this series is utterly gorgeous and adds so much beauty to the story in my opinion. I can’t pick a favourite in this series it is just impossible but it is an amazing series and needs to be read by all.

What are some books you could talk about forever? Let me know in the comments below. Be sure to look out for part two of this series coming soon!

11 thoughts on “Books I Could Talk About Forever – Part One”